ADVISOR TO THE RECTOR 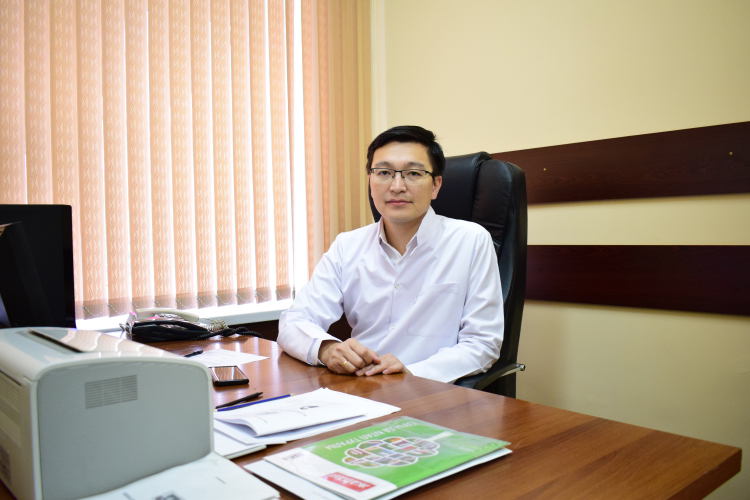 in 2008, won a grant from the American Association of Clinical Oncologists (ASCO) with the opportunity to undergo an internship at the M.D. Andersen in Houston for head and neck surgery. Also, under a grant from EAFO (Eurasian Federation of Oncology), he completed an internship at the European Cancer Clinic in Milan in laryngeal surgery. In the course of his residency, he was the organizer of many educational events under the auspices of the European School of Oncology (ESO).

In 2010, together with the Minister of Health of the Republic of Kazakhstan, he participated in the World Cancer Leaders Summit UICC in Shenzhen, which contributed to the advancement of Kazakhstan in the fight against cancer at the global level.

Also, he graduated from the Higher School of Public Health (HSHO) with the award of the academic degree of Master of Medicine. His topic, “Evaluation of the quality of periodic protocols for diagnosis and treatment in oncology” was recognized as the best in the course and was awarded a certificate from MK Kulzhanov.

In 2012, he led the process of creating the second highly specialized department of head and neck tumors in Kazakhstan in Astana at the initiative of the city akimat. During the period of work, for the first time in Kazakhstan, operations were introduced for microsurgical restoration of defects in the oral cavity and pharynx by transplantation of composite flaps, previously such patients were sent for treatment abroad. Passed an internship for 2 months at the world's oldest oncology center named after Sloan Kettering in New York on a grant from the center itself.

He introduced all the acquired knowledge in Kazakhstan.

Since 2014, he worked at the Kazakh Research Institute of Oncology and Radiology as the head of the national monitoring and evaluation group and an oncologist. Since 2008, he is a member of the American Association of Clinical Oncologists and the European Association of Surgeon Oncologists. Repeatedly presented oral reports at international conferences in New York, Seoul, Singapore, Minsk, Vienna, etc.

Published 8 abstracts and 10 articles in scientific journals, 6 of them in foreign journals and one in the journal Lancet oncology, one of the five most cited in the world.

In 2017 he participated in the international competition UICC young leaders and became one of 7 winners.

Since 2018, he has been a member of the executive committee of IFHNOS (International Federation of Head and Neck Oncology Communities). In the same year, he won the project 100 new faces.